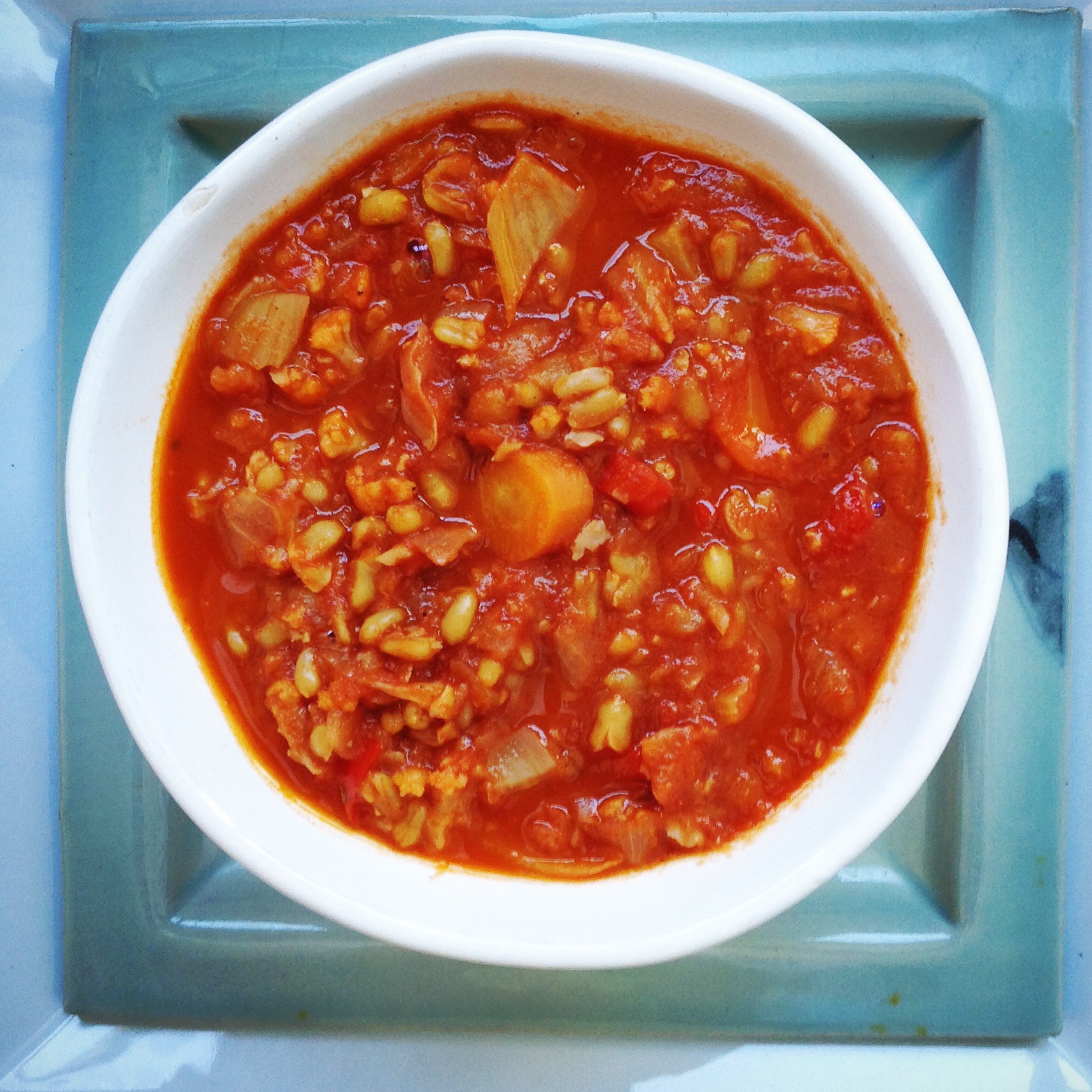 Heat a large greased pot over medium heat. Add onion, celery, and red pepper, and sauté until onions are translucent. Add cumin, cinnamon, ginger, paprika, cayenne pepper, salt, and pepper, and cook for another minute until fragrant. Add carrots and fennel. Cover and cook for 5 minutes. Add the cauliflower, chickpeas, cooked Kamut berries, tomatoes, vegetable broth, and garlic, making sure that everything is covered in liquid.

Bring to a boil, lower the heat, close the lid, and simmer for about 30 minutes until the vegetables are tender. 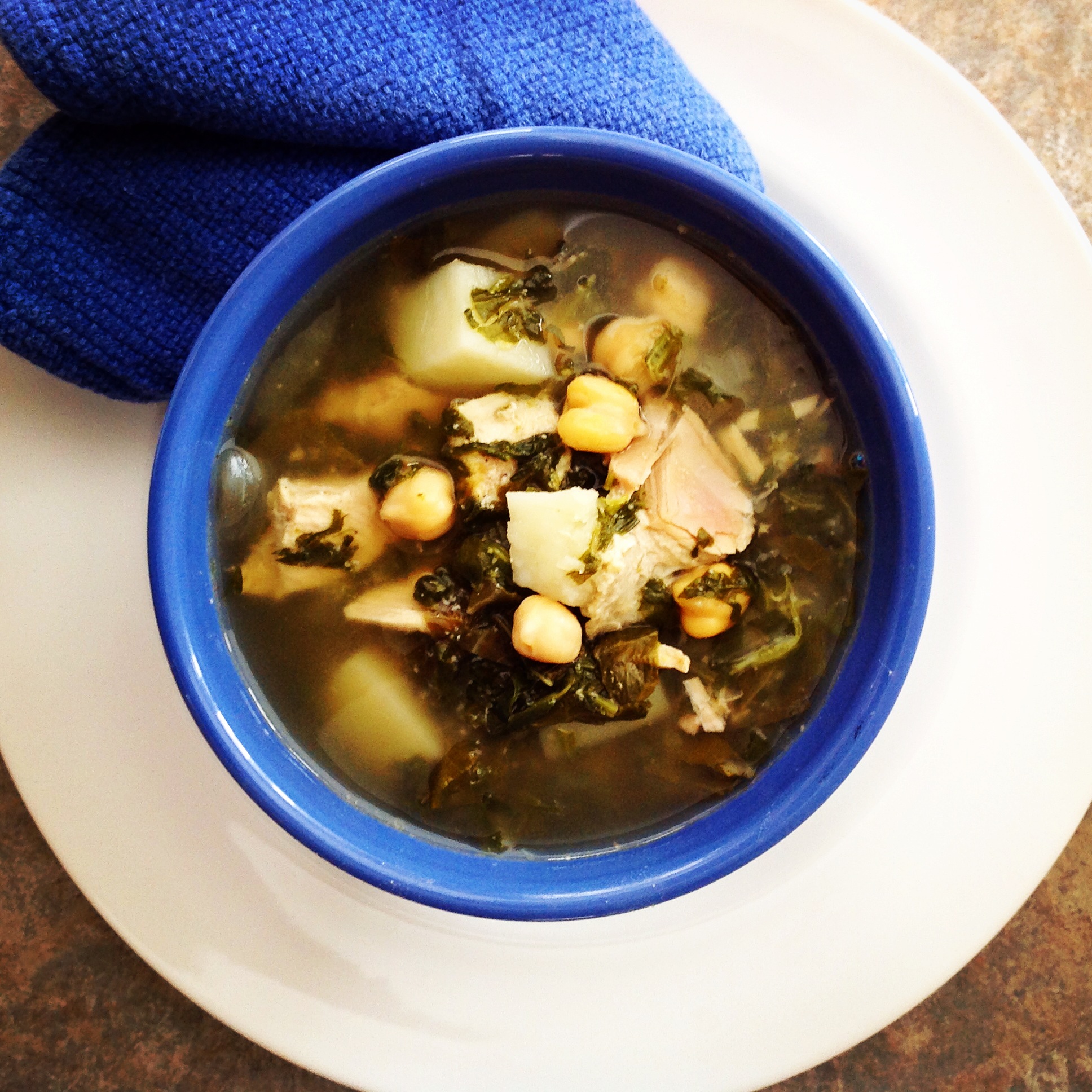 Reserve 2 cups of chicken/vegetable stock and the chickpeas. 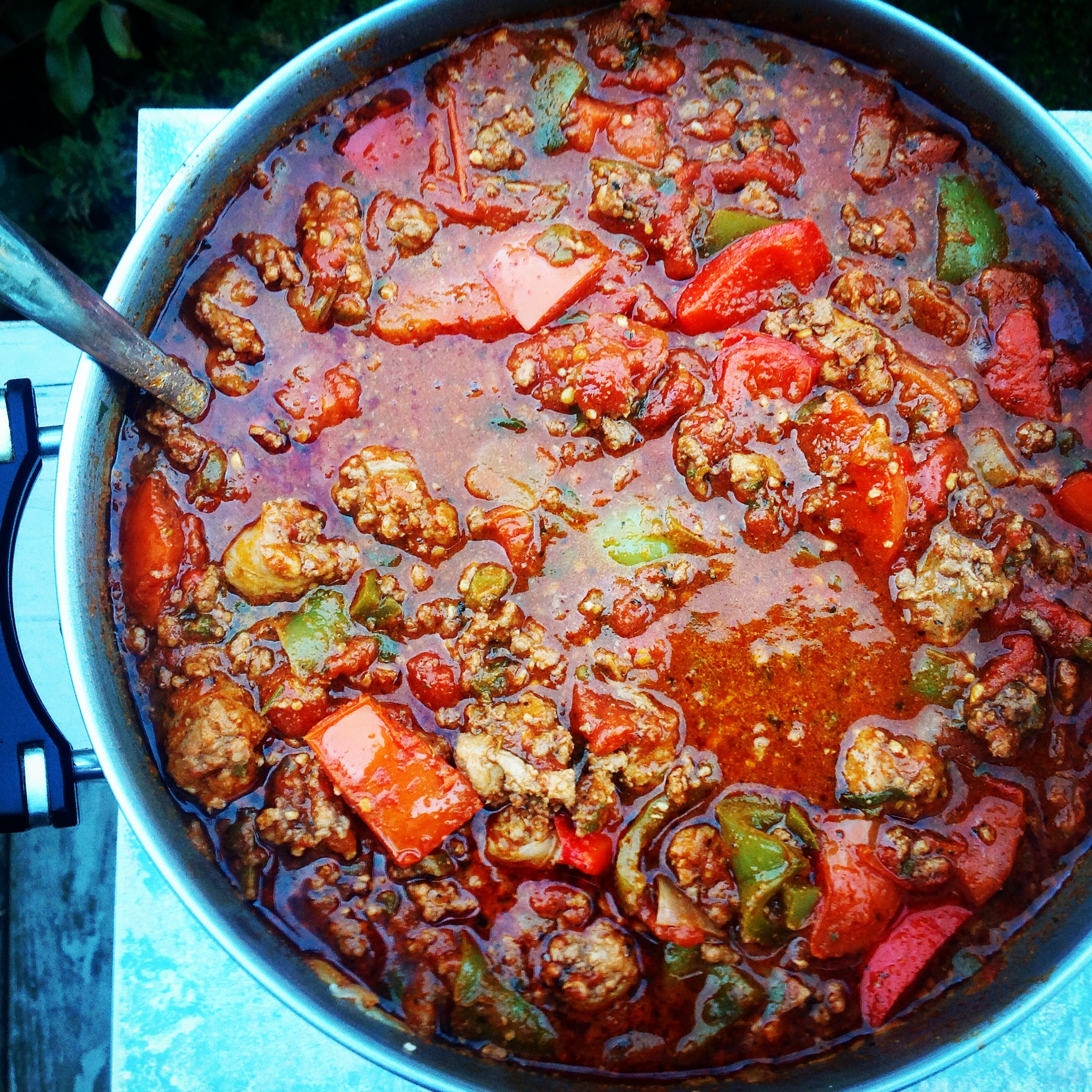 * Note: Be really careful with the jalapeño peppers. Wear rubber gloves and make sure not to touch your eyes, mouth or face. Don’t leave any seeds on the chopping board and thoroughly wash it afterwards. Wash your hands with soap and water right after dicing the peppers.

Place a large skillet over medium heat and sauté the sausages until well browned. Transfer to paper towel to drain. Heat the oil in a deep, heavy pot over a low heat and add the onion and garlic and cook until wilted, about 5-7 minutes. Raise the heat to medium and crumble in the ground beef. Cook stirring frequently to break up the pieces, until the meat is well browned, about 12-15 minutes. Add the drained sausages, bell peppers and jalapeño peppers. Cook stirring frequently until the peppers are slightly wilted about 10 minutes.

Remove the pot from the heat and stir in the drained tomatoes, wine, parsley,  tomato paste and all the herbs and spices (do not add the fresh tomatoes yet). Return the pot to medium heat and cook slowly, stirring frequently for a further 15 minutes. Add the fresh tomatoes and cook for another 10 minutes. Ready to serve and top with the chopped scallions, sour cream and grated Monterey Jack cheese. Those that like the extra heat can add a couple of very thinly sliced pieces of jalapeño pepper with seeds. 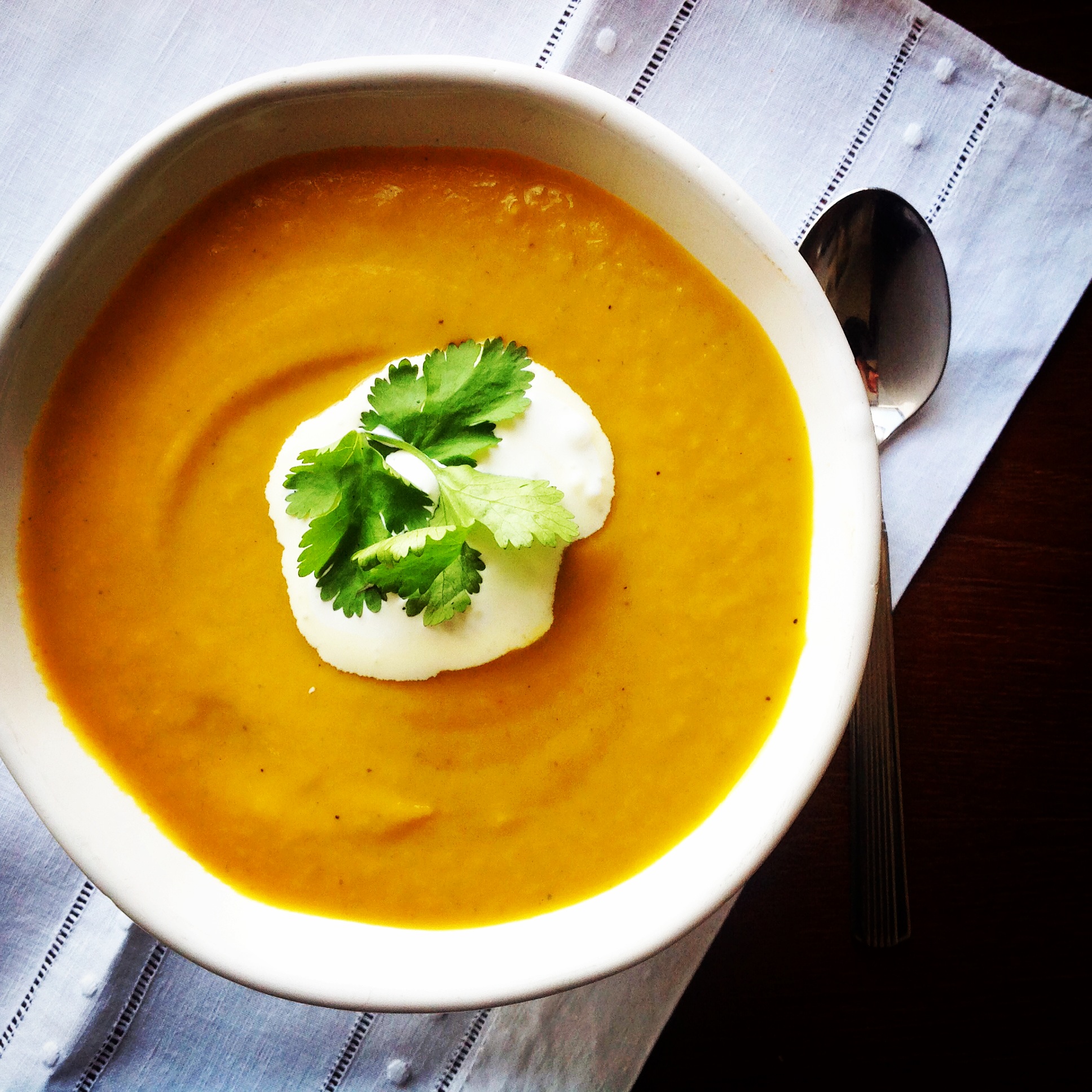 In large soup pot melt the butter and heat the oil. Add the onion and cook over a low heat until wilted, about 10 minutes. Add the carrots, celery, stock, cilantro, salt, black pepper and cayenne. Bring to the boil, reduce heat, cover and simmer until the carrots are tender, about 40 minutes. Allow to cool slightly, then puree the soup in batches. If serving chilled, put into the fridge—over night would be preferable. If serving hot, return to the soup pot and heat through. Perfect served with crème fraîche and fresh cilantro leaves. 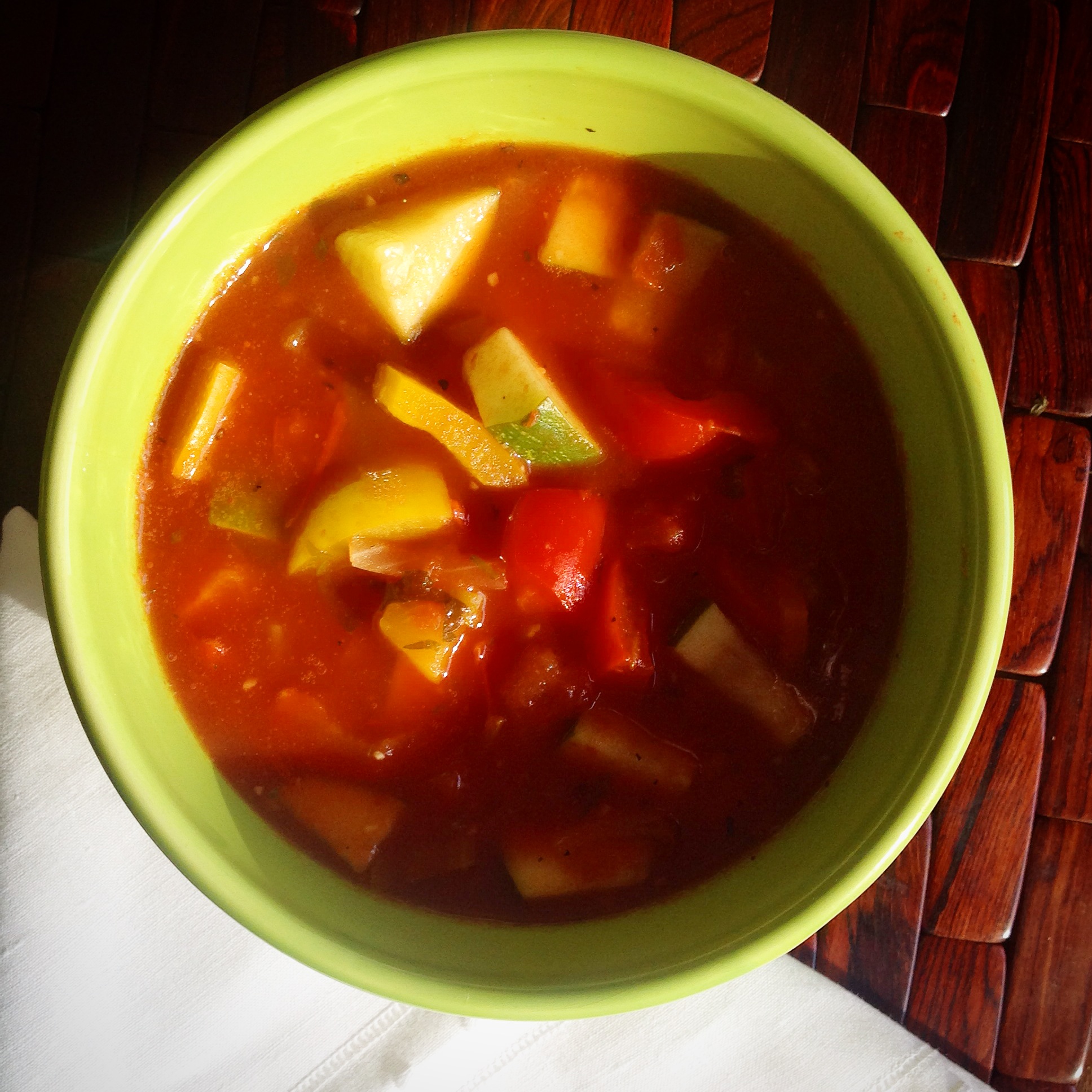 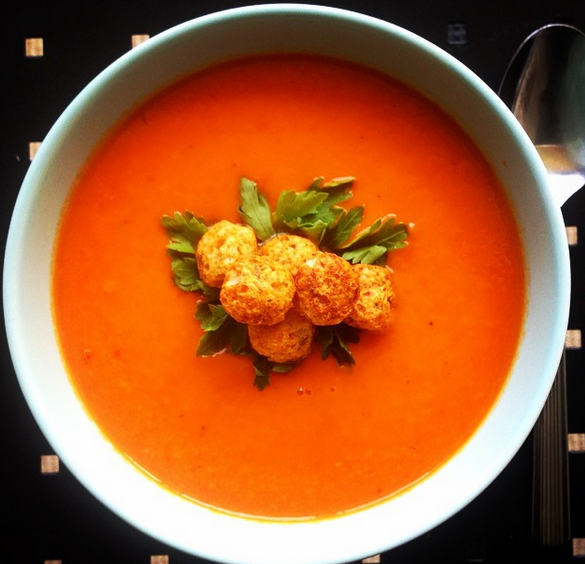 6   red bell peppers, cored, seeded and cut in half lengthwise

Preheat oven broiler. Line a baking sheet with foil , lay half the peppers with the outsides up and broil until the skins are black and charred. Work in batches and transfer the roasted peppers to a large plastic bag and seal. Allow the peppers to “steam” in the bag for ten minutes. Remove the peppers, pull off and discard the skins. Coarsely chop the peppers and set aside.

Melt the butter in a large soup pot. Add the onions, leeks, salt and pepper. Saute over a low heat until the onions are soft and translucent-about 10-12 minutes.

Coarsely chop the remaining peppers and add them to the pot along with the potatoes, roasted peppers and stock. Bring to the boil, then lower the heat and simmer uncovered for 30 minutes until the vegetables are tender.

Transfer the soup in batches to a blender and process until smooth. Return to the pot and heat through.

Who Is Jamie Anderson and How Is she Helping Our Planet