The National September 11 Memorial Museum opened its doors to the public on Wednesday, May 21, 2014. Since it’s opening, I have avoided going, as events from that day and the weeks, months and years following are still raw and emotional. Living in Battery Park City I was there on the corner of Liberty Street and the West Side Highway when the first plane hit. I have lived through the daily recovery and it now seems so surreal. Luckily I did not lose a loved one on that terrible day, but life has never been quite the same.

As I decided to write a piece on 9/11…sixteen years later, I thought I should visit the museum. I walk past the infinity pools every day on my way to and from my downtown office. I often look up, especially on a sunny day to marvel at the Infinity Tower. And, like many others, the one thing that is indelibly imprinted in our memories is the beautiful cloudless blue sky of that fateful day. 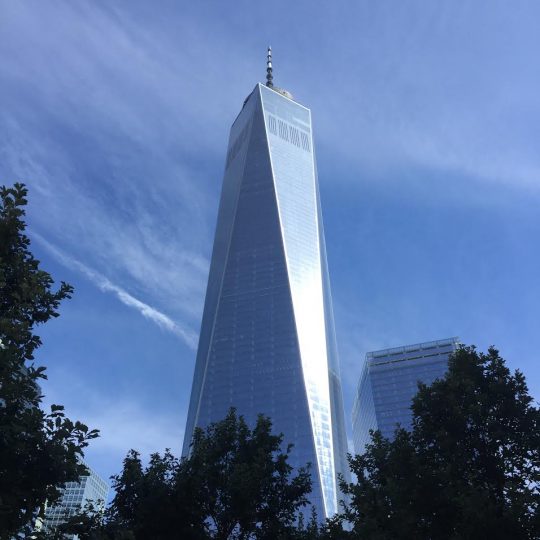 The morning I visited the museum Friday September 1st the sky was the same brilliant blue and the exhibit that took my breath way the installation in the Memorial Hall. The Memorial Hall is situated between the Twin Tower footprints, and Spencer Finch was the only artist commissioned to create a new artwork for the museum. Finch’s work, Trying To Remember the Color of the Sky on That September Morning, is inspired by the memorably clear, intensely blue sky. The work covers most of the central wall in the museum’s subterranean exhibition space. Though it may appear from a distance to be a stone mosaic, the piece comprises individual sheets of Fabriano Italian paper that the artist has hand-painted in different shades of blue with water colors, hung like the missing person notices that filled the city’s streets in the days and weeks following the tragedy. Each of the 2,983 squares represents one of the victims of the 2001 attacks and the 1993 World Trade Center bombing. It frames the large wall text “No day shall erase you from the memory of time,” a quote from Virgil’s Aeneid.

There are many other heart-rending exhibits, but this wall took me back to that day like no other. The memory of a perfect September day, that brilliant blue sky, it made you feel happy to be alive…seconds later it was hell on earth.

An excerpt from the Museum guide:

The National September 11 Memorial Museum at the World trade Center bears solemn witness to the terrorist attacks of September 11, 2001 and February 26, 1993. The Museum honors the nearly 3,000 victims of these attacks and all those who risked their lives to save others. It further recognizes the thousands who survived and those who acted with extraordinary compassion in the aftermath. Demonstrating the consequences of terrorism on individual lives and its impact on communities at the local, national and international levels, the Museum attests to the triumph of human dignity over human depravity and affirms an unwavering commitment to the fundamental value of human life.

The Vitamins You Aren’t Getting Enough Of, and How to Fix It

3 Events To Watch on Earth Day

3 Ways How New Technologies Are Changing The...