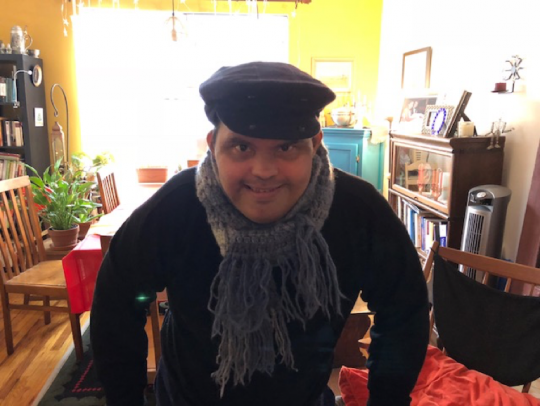 Preparing to write this article about Down Syndrome I can’t help but to look back at my own experience with my brother Jesus, a.k.a. “Junior”, and what he meant to me during my childhood years in Venezuela and  what he now means to me during my adult life.

The scientific definition of Down Syndrome is a congenital disorder caused by a chromosomal defect, most commonly the result of an extra copy of chromosome number 21 and resulting in intellectual impairment and physical abnormalities. But from a personal perspective, I have a different definition “very special kids”.

As the youngest of three siblings growing up in Caracas, Venezuela, I always followed my older sister Vicky’s lead and Junior – the middle one – usually followed his own unique drum beat.  Despite his Down Syndrome, Junior was extremely active, athletic, playful, stubborn and mischievous and won medals as a swimmer in the Special Olympic and later, during his adult life, he held down a job at an airline where he earned a salary (which he diligently saved).

Junior likes to use cologne to smell good and appreciates nice clothes. He insists on keeping his hair short and combed, bathing and brushing his teeth every day and loves to be regularly  shaved.  He eats everything we cook for him and never complains and is always cheerful.  He likes to watch sports, especially boxing and his favorite baseball team is the Yankees – like my mom.

As my mom explained to me once, when my brother was born it was a shock. Down Syndrome didn’t run in either of my parents’ families so Junior was an absolute surprise. The doctor then recommended my parents to have a third child –me – so Vicky could have a sibling who did not have Down Syndrome who she could play with and relate to.

We all got along pretty well; we played, ate, watched TV and did homework together and lived a very normal life thanks to my mom’s efforts.  People were not always very understanding: for example, sometimes when my mother would drop all three of us of at swim lessons, she would have to present a letter she carried with her from the doctor stating that Junior’s psoriasis wasn’t contagious.

Junior has suffered from various health conditions associated to his syndrome during his forty-five years.  Although each person with Down Syndrome is a unique individual, they all have common physical traits such as small stature, an upward slant to the eyes, and a single deep crease across the center of the palm. My brother also has speech limitations, and so my mother was always eager to find the newest available treatment for Down Syndrome.

Vicky and I also fought with other kids who made fun of Junior, but most of my memories are positive: the three of us playing hide and seek, performing live shows when people came to our home to visit, and getting in trouble since both, Vicky and Junior were “extremely curious.”

Each year in the United States, about 6,000 babies are born with Down Syndrome, which is about 1 in every 700 babies born. The estimated incidence of Down Syndrome worldwide is between 1 in 1,000 to 1 in 1,100 live births.

In most cases, our experiences shape the way we think and behave. I wouldn’t be the person I am if I did not have Junior in my life as a child and now again as an adult. It gives me great happiness to know that he’s with us at age 45, even though as recently as 1983, the average lifespan of a person with Down Syndrome was 25 years. Today life expectancy is 60 years, largely because of the end of the practice of institutionalization.

Please don’t miss the chance of watching a great example of how far people with disabilities like Down Syndrome can go: Sock Company

eco18 is a collective of writers talking about sustainability issues, healthy living, and the little daily changes we can make to protect our planet and all of its inhabitants. Started in 2011, our team has grown - learn more about the writers of eco18 on our About page!

All The Pumpkin Carving Inspiration That You Need

Why you Should Adopt

4 Eco-Friendly Activities for Kids to Enjoy in...

What Did Our Favorite Teachers “Teach” Us

Why It’s Important to Eat Dinner as a...