WHAT WOMEN SHOULD LEARN FROM THE SUFFRAGETTES

An article in The Guardian newspaper first published in 2013, shed a lot of light on the Suffragette movement for me, as did the most recent movie Suffragettes.

While I thought I had an idea of what these women went through, it was nothing like the awful reality of what they endured to make sure generations of women following not only had the right to vote, but that they were on the road to equality.

In her work for the group, she gave speeches that encouraged militant action. She declared in 1913, “Militancy has brought woman suffrage where we want it, that is, to the forefront of practical politics. That’s the justification for it.”

Between 1908 and 1914, Pankhurst was imprisoned 13 times. She would be released after going on hunger strikes, but the police pursued her again once her health had recovered. This cycle only ended with the advent of World War I, when Pankhurst directed WSPU members to support the war effort. In 1918, after the war, Pankhurst was pleased to see women granted limited suffrage. 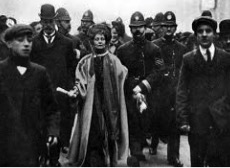 What can we learn from Pankhurst and the other brave women as we continue to fight for equality?

Find your voice, and don’t be afraid to use it

The lack of women in public life today is often attributed to a lack of confidence, and the suffragettes sometimes struggled with this too. Kitty Marion, an actor as well as a suffragette wrote, “I felt as if every eye that looked at me was a dagger piercing me through and I wished the ground would open up and swallow me. However, that feeling wore off and I developed into quite a champion.” You have to find your voice and become a champion for your cause.

Being ladylike is often overrated

Women were bound by feminine ideals at the start of the last century – expected to be submissive, nurturing, self-effacing – and that prevails even today. The suffragettes weren’t having it. As Emmeline Pankhurst, once said, “We threw away all our conventional notions of what was ‘ladylike’ and ‘good form’, and we applied to our methods the one test question: will it help?”

Take strength from the haters

Anyone who takes a stand online knows there can be a nasty response, and the suffragettes received hate mail too. But it wasn’t just hate mail they had to contend with. Rats would be let loose into suffrage meetings, while rotten eggs and fish were pelted at the women. The only useful response was to take strength from the insults. Rebecca West’s reflections on events of a century ago, “the real force that made the suffrage movement was the quality of the opposition,” wrote West. “Women, listening to anti-suffrage speeches, for the first time knew what many men really thought of them.” I think we are all wondering that even now!

Accept that those haters will include other women

In a male-dominated society, women are often brought up to identify with men, to see men’s views and rights as paramount, and so it’s not surprising that many women oppose their own liberation. In the suffrage era the most prominent was Queen Victoria. Today, women can be the hardest critics of their own sex and they have social media from which to spew their venom.

The suffragettes were a creative whirlwind, constantly devising new ways to catch the attention of politicians and the public. It was the publicity campaigns and the strength of the central message that brought them there, as well as the fact that being a suffragette must have looked exciting, a revolutionary approach to female life. There’s often tension today between those who deliver feminism with humor and those who prefer unfiltered anger – the suffragettes showed us that both are necessary.

After a meeting of 30,000 suffragettes in 1906, Emmeline Pethick-Lawrence said she had “never met anyone so fearless as were these young girls. I never saw a suffragette, under menace of violence, otherwise than cool and collected.” Such bravery was necessary, as the women often faced serious violence and sexual assaults. The suffragettes kept going, despite the opposition and immediate consequences. While we may look back on their actions of civil disobedience and balk at some of the suffragettes’ more destructive actions, their audacity was inspiring.

Today many of us complain of burnout and fatigue over problems that seem to stretch ahead intractably. The suffragettes must have felt the same at times. Histories often focus on the last 20 years or so of the struggle, but women fought for the vote for more than a century. In England, they were finally granted the vote on the same terms as men in 1928. Putting that into perspective, my grandmother was 25 at the time.

Accept victory – nothing else

The one thing the suffrage fight suggests is that we need a whole spectrum of women to take up the equality fight: the rabble-rousers, theorists, dogged campaigners, sympathetic politicians, those whose wit draws women to the cause, those whose anger keeps them motivated, and those who quietly, conscientiously chip away at issues that make others give up in despair.

We have come a long way, but we still have a long way to go. Let’s take these hard learned lessons and make these amazing women proud.

The Current State Of Planned Parenthood