Equal Pay Day…It’s Time To Get Even.

The fact that in 2018 women are still not paid equally is shameful. Where are we going? It’s certainly not fast forward.

According to the Economic Policy Institute’s 2016 analysis of federal labor statistics, the median wage for U.S. women is about 16.8 percent less than the median for men — with women making about 83 cents to a man’s dollar. According to economist Elise Gould, that’s a gap that only increases as women become more educated and climb the corporate ladder. “At the bottom, there’s just so far down women’s wages can go. They are protected to some degree by the minimum wage,” said Gould. “But as you move up, women are not occupying places at the top the way men are. The wage gap at the top is much larger.”

“Equal pay for equal work” became a rallying cry in the 1960s, and it hasn’t gone away since then. Even though the Equal Pay Act of 1963 was meant to abolish wage disparity based on sex, It seems nearly every large employer in America has lately been targeted with a pay discrimination suit. Google (GOOG), Facebook (FB), Uber, Microsoft (MSFT) and Oracle (ORCL) are just a few of the companies that have been accused of discriminating against women in compensation.

the type of job and years of experience, the gap between men’s

That gap is much larger when looking at raw figures — the median working woman compared with the median working man. By that measure, no industry cracks the 90 percent mark. Women are underrepresented in the best-paying jobs in the labor market, and they’re underrepresented in the leadership role. By mid-career, men are 70 percent more likely than women to be in executive roles, PayScale found. By late career, defined as age 45 and over, they’re 142 percent more likely to have a higher-profile role — and its attendant higher salary. 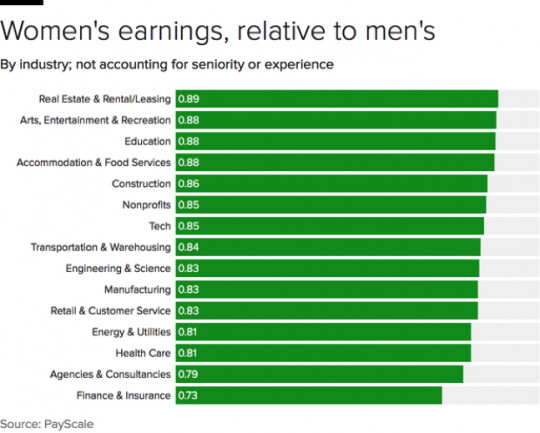 The financial sector does the worst in this measure, with women earning less than three-quarters of men’s pay. Because of the outsize salaries in finance, that gap has a disproportionate effect on women’s pay overall, effectively widening the average gender pay gap. Finance is not known for being particularly friendly to work-life balance, and that, too, affects women disproportionately. Workers who can’t balance their job with other obligations — like dealing with personal health issues, getting a degree or taking care of family — can end up leaving the job market altogether. When they return to work, sometimes years later, they’re penalized by being paid less than a comparable worker who is hired straight out of another job. When PayScale analyzed the reasons for men’s and women’s unemployment, some stark differences emerged. Men who were unemployed were more likely to have been in school or have quit their previous job. Women were more likely to have relocated or to have been caring for a child. 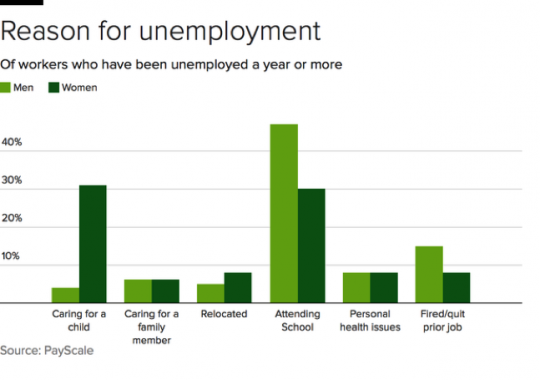 Companies still have a long way to go to help workers handle life interruptions without penalizing their jobs. This could include maternity and paternity leave. It could also include policies like pay transparency, which not only help reduce pay disparities but can increase workers’ morale and productivity, according to recent studies.

Women still, unfortunately, have to fight for their rights for equal pay, but employers too have a responsibility… it’s not only up to us women to fix the problem. Here’s what some women have to say on the subject:

How to Workout During Your Travels

HEALTHY PLACES TO EAT IN NYC